Posted by Amanda Clowe on February 8, 2016 in Pet Photography |No Comments 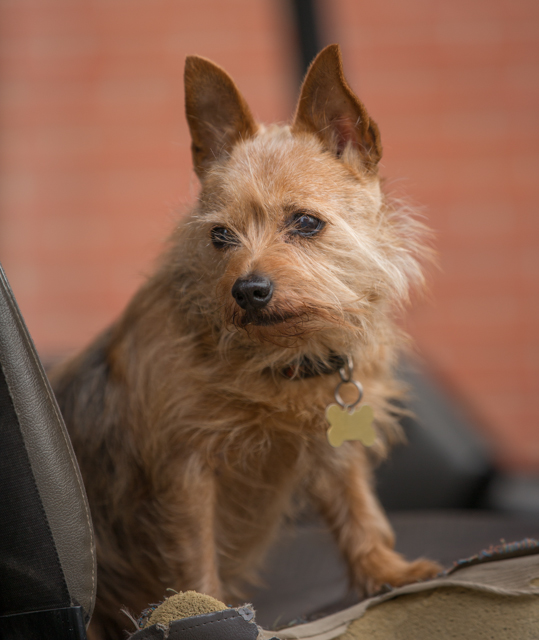 This cheeky little fellow is called Ozzy, although he is known affectionately as “Rat Boy” to his owner Steve …

I was amazed to learn that Ozzy is 13 years old (with his 14th Birthday due in October) as he seemed more like a sprightly pup to me. His days are spent riding around in his owner’s van whilst Steve carries out his job helping people with rubbish removal from their homes.

Steve’s van is an alternative to having a skip and the best part is that he is the one who loads all the rubbish and sweeps up afterwards. Ozzy divides his time between sitting patiently on the front seat and exploring his latest new environment.

He is in the most part Yorkshire Terrier with some Chihuahua thrown in for good measure. He is very well-behaved and showed no inclination to snap or bark – in fact – a very ‘chilled out’ individual . He was not in the least bothered by meeting Rusty- and nonchalantly

ignored him and trotted past into my back garden to cock his leg up against one of my flower pots !

I had to smile because it was my neighbour who was having his garage cleared out – not me.

Steve told me that Ozzy has always had that relaxed side to his character since he was a pup and loves making himself at home wherever he goes. I couldn’t resist taking a few photos whilst Ozzy was in the neighbourhood …

You can find Steve and Ozzy at http://www.stevesrubbishremovals.com